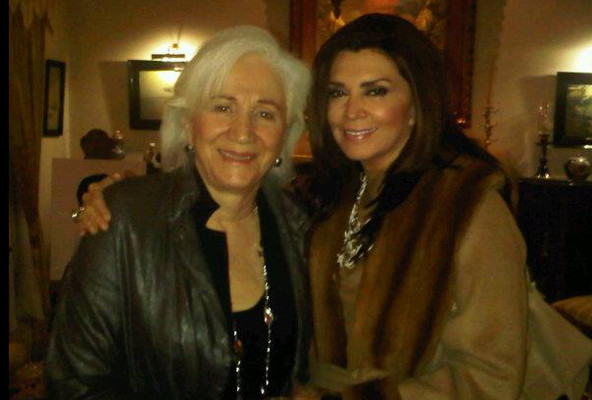 Today I had the unique occasion to be invited for coffee, along with 9 special women, one of whom happened to be Greek Oscar winning actress Olympia Dukakis.

I believe that big success does not happen by chance. So whenever I meet a person that has achieved something in their life that admire, whether it is great business success, something unique in their career, a very successful marriage or have offered something extraordinary to the world, I always like to ‘put them in the corner’ and ask questions, so that I learn from their experience.

Olympia Dukakis is 80 years old this year, beautiful and vibrantly healthy, intelligent with a powerful presence, has a happy marriage with her actor husband for the past 49 years (something extremely rare for actors and Hollywood standards), has three children and four grandchildren, is an Oscar, BAFTA and Golden Globe winner, has both starred in and directed numerous successful movies and theatre plays the past 40 years and has the achieved the success that all actors dream to have in their lifetime. Pretty awesome for a daughter of a couple of first generation Greek immigrants in the US!

Having her opposite me in a relaxed setting over coffee and listening to her mention her husband of 49 years, my first question to her was ‘How did you do it? Forty-nine years of marriage especially in Hollywood, where marriages typically don’t last is so rare! Do you have any tips for us the younger generation?’

She chose to answer with a story… ‘A few years ago we were having Valentines dinner with two couples of friends, who had been married for many years too.  At some stage the discussion came to what kept us with our partners all these years in a successful marriage. The first couple said:  ‘Well, when we married we had our vows, and all these years we have stuck to our marriage vows, that’s why we have been faithful to each other and are still together’

The second couple said ‘Since the day we were married, we never spend one night away from each other. We have spend all nights in our marriage sleeping together and this has kept us close to each other and has kept our marriage strong’

The discussion was very enlightening, so I decided to ask a question that is troubling most women who want to achieve success in their work and business. ‘What do you believe a woman needs to have today to succeed in her career while maintaining a healthy marriage and family’?

‘Well, what most women don’t realize is that men who succeed work really hard. So success requires a lot of hard work and sacrifices, whether you are a man or a woman. In addition, in business settings a woman needs to be careful about how she presents herself, so that she can be taken seriously, especially by men. You can present yourself as powerful, intelligent and feminine at the same time, without being overly sexual’.

‘But are women really equal to men? I mean in terms of time availability, don’t they need to work even harder and longer hours than men, provided they are the ones giving birth, raising children and taking care of the household?’  I continued, since this is an issue of ‘equality’ that concerns me. ‘How did you find the balance between work and family’?

‘Well, there is only one secret that I have here: I married the right man! I married a man who believed in me, supported me, encouraged me to follow my dreams and achieve what I desired. You need to marry a man who believes in you, supports and encourages you. Also a man who is willing to share responsibilities, so when for example I had to travel for work, he was willing to drive the kids to school, hockey, soccer and take care of whatever they needed, until I was back, I couldn’t have done it otherwise’.

Olympia is straightforward, lacks the pretention that you usually see in actors and celebrities and has a powerful yet soft and feminine aura.

As I was writing this blog post,  I found out that there she has also published her autobiography, Olympia Dukakis ‘Ask Me Again Tomorrow: A Life In Progress’

where she describes how she overcome limitations at the beginning of her life and career to managing to ‘Have it All’ – career, family, marriage, home –  and become a role model to women of all ages.

I am expecting the book to arrive in my mailbox soon as I look forward to meet Olympia again, while she is staying in Cyprus for an upcoming Theatre play. If you have enjoyed this post please share with your friends and share your comments below 🙂

Pavlina Papalouka is an Entrepreneur founder of AwakenSpace Education, a seminars and education company specialising in helping people reach their true potential and build successful businesses around their passion and a speaker, consultant and coach in Personal Development, Business and Personal Branding.

This site uses Akismet to reduce spam. Learn how your comment data is processed.